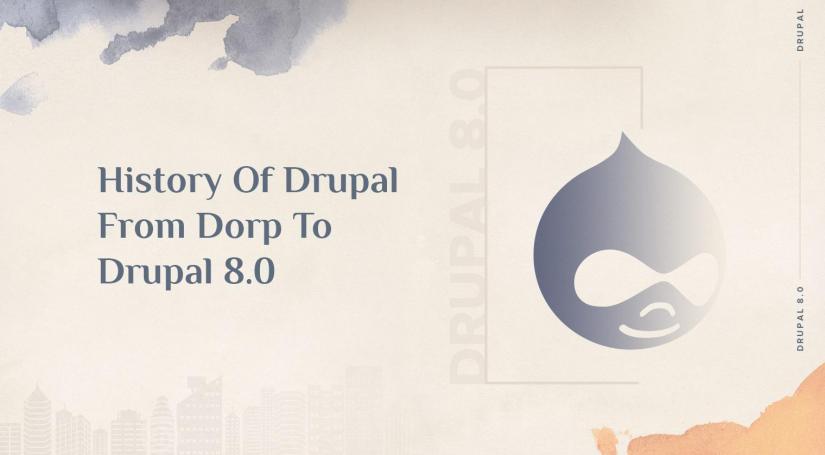 History of Drupal- From Dorp to Drupal 8.0

If We Ask About The History Of Drupal From Dries Buytaert (Founder Of Drupal). He Simply States- "For Me, It Is A Chain Of Interesting Surprises.

Drupal was started as a forum for some friends to inspect their shared internet connection and now it is one of the most powerful CMS available in the market.

The meaning of "Dorp" in Dutch is "village" & that is how Drupal got its start.

In this article, we will give you information about the features and functionality of Drupal. Our Sources include History of Drupal: from Drop 1.0 to Drupal 8.0 slideshow by Tamer Zoubi CTO at Web Solutions|HR and CHANGELOG.txt

Drupal 1.0 released on 15th Jan 2001 and another interesting fact about this date is Wikipedia also launched on the same day. Drupal 1.0 began with 18 core modules and each was a PHP file. Dries focuses on modularity from the beginning, he states "modular design provides flexibility, adaptability, and continuity which in turn allows people to customize the site to their needs and likings". The system depends on SQL to modify and manage themes, layout, content and more. The main reason behind the extreme success of Drupal is from starting it is possible for each and every user to become a contributor.

It was released on 15th March 2001 just after 2 months of Drop. It came up with Translation feature that allows the user to either create or overwrite their website in different languages. Drupal 2.0 provides a framework to setup a multi-lingual site. To add a new language you have to edit the configuration file and SQL DB manually by using the t() function. Drupal 2.0 have 22 core modules, added user ratings, and section for stories.

It was released on 15th Sep 2001. It was released with a concept of "nodes" rather than "pages". Each and everything now exists as node whether it is a forum, blog, story, diary, or book and these are managed by node module. Now the core modules reach to 26.

In Feb 2002, the famous news site kerneltrap.org migrated to Drupal 3.0.2.  Jeremy Andrews author of kerneltrap.org wrote throttle module which will later be included in core and become one of the top Drupal contributors.

It was released on 15th June 2002. Nearly 100 major websites were already built with Drupal, and now Drupal became an international open source project.  Drupal 4.0 brings in the Taxonomy module which replaces the meta tags and attributes. This is the stage from where Drupal started to look more like an enterprise CMS.

In this phase, hundreds of modifications are done including the very first e-commerce module of Drupal(4.4).  Some modifications and new modules were added. Below are some-

In 2003, DeanSpace used open-source sharing of Drupal to support a decentralized network of approximately 50 disparate, unofficial pro-Dean websites that allowed users to communicate directly with one another as well as with the campaign. Due to this Drupal saw 300% increased activity on drupal.org in terms of content.source- https://en.wikipedia.org/wiki/Drupal Drupal 4.7 includes New Forms API and lots of JS and AJAX. Now the number of core module reach to 31.

It was released on the 6th birthday of Drupal on 15th Jan 2007. Drupal 5.0 sported jQuery a JavaScript library that makes HTML scripting easier. Also reorganized module directory structure which means all modules have their own directory. CSS preprocessor: All (cacheable) stylesheets are now summed into one compressed file, which makes your site speedy, especially for first-time visitors.

It was released on 13th Feb 2008. whitehouse.gov adopted Drupal 6 as their CMS and this was one of the greatest achievement for Drupal. Drupal 6 launched as the easiest version of Drupal that time. Main features include-

It was released on 5th Jan 2011. From simple blog site to large corporations site Drupal became trustworthy platform worldwide. It has now over 11000 contributed modules, more than 600 themes. Some of the features of Drupal 7.0-

It was officially released on 19th Nov 2016. Drupal 8 come up with a concept "Build something Amazing". It has now more than 60 core modules. To know better about Drupal 8.0, you should read our another blog- Why should you consider taking up Drupal 8?

So now seeing the interesting history of this robust CMS platform, without any second thought, Drupal is the best CMS platform to be chosen for all the website needs across. With such big and growing community and its quality experience, Drupal is one of the best CMS platforms. And now if you are also keen to get your website developed on Drupal, no need to look elsewhere, Auxesis InfoTech is all set to full fill all your needs in that regard by giving you out the best of services.

history of Drupal, Dorp to Drupal 8.0