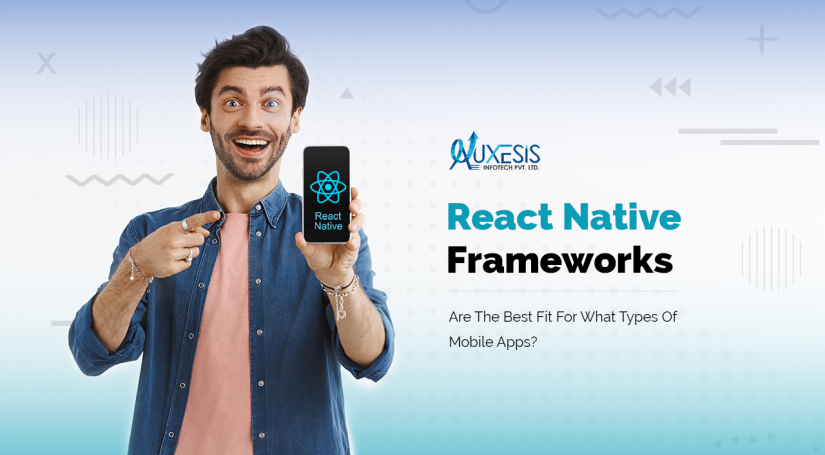 React Native Frameworks Are The Best Fit For What Types Of Mobile Apps?

React Native has been one of the most popular cross-platform mobile app development frameworks of today as per a survey held in 2021 by Statista. As per the survey, about 38% of software developers used React Native in the year 2021.

Evidently, it is one of the mainstream development frameworks used today. But, one might have to seek answers to several questions to understand how to develop a mobile app successfully.

The questions one must seek answers to are -

What makes it suitable for development?

Which kind of applications can be developed using it?

And what are some popular apps built on React native frameworks?

Here, you can find answers to all such questions and more. Read on to know! 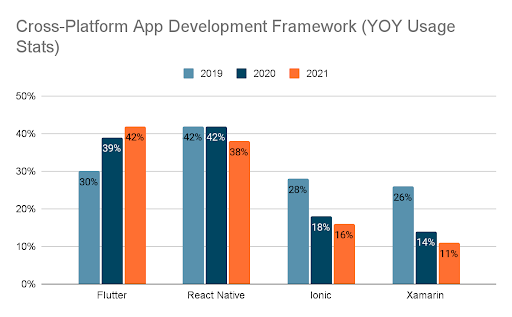 An Introduction To React Native

React Native was initially released in the year 2015 by Facebook and the community. The open-source software development network helps with Android and iOS development under a single codebase.

In the initial days, Facebook planned to develop this framework for iOS platforms only. But later, they decided to support Android as well as iOS to develop native-like user interfaces for your mobile app.

In fact, React Native appears to be one of the leading mobile app development frameworks used today. Furthermore, look into the various pointers showing how React Native has become an indispensable part of today’s software industry.

How Much Importance Does React Native Hold in the Software Industry? 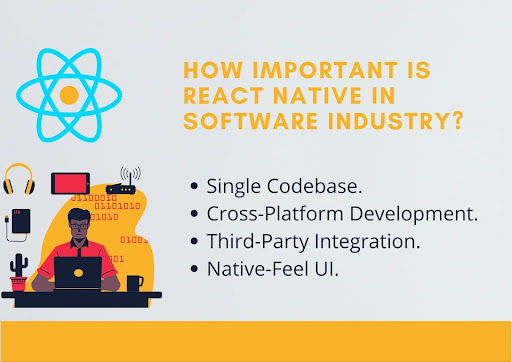 The software industry is fast-paced and app developers always have to stay on their toes to keep up with the evolutions. Because of its quick development and deployment time, it is widely welcomed by mobile app developers.

Besides, anyone who is proficient with development languages like HTML, CSS, Javascript can easily get used to working with React Native.

If you ask about the significance it holds in today’s software industry, we would point out a few things in this regard -

What Are Some Popular React Native Apps? 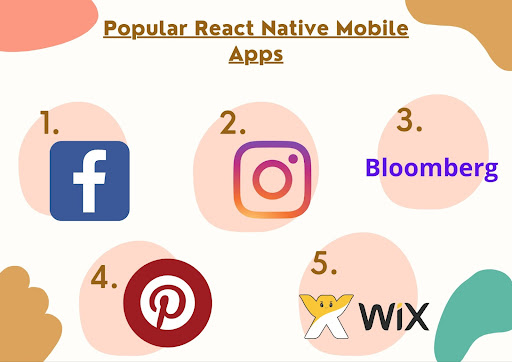 However, when React Native was introduced by Facebook initially, they only extended support for iOS platforms and not Android. Today, the scenario is entirely different with React Native being suitable for cross-platform app development. In any case, the apps developed using the framework witnessed a performance improvement and had simple navigation and UX.

In the year 2020, the number of Instagram users surpassed the 1.3 billion mark. That itself speaks for the massive popularity of Instagram and how well the platform is built. Initially, they started integrating a small portion of their app with React Native for performance boost like ‘Push Notification View’.

But with time, they were able to integrate React Native for good with their natively developed code and create faster functioning mobile apps.

Bloomberg is a finance and information company that develops software and tools for various analytics and trading-related activities. The Bloomberg mobile app uses React Native because of its high-performance boost, auto code refreshes for instant release of updates and features, and compatibility with native mobile and web technologies.

As per reports, about 460 million individuals use Pinterest today. It has turned into a huge visual search engine where individuals and businesses can seek inspiration from, create mood boards, and more.

Since the app deals with a huge amount of visual data, it requires a fast-performing framework, and React Native served the purpose. It helped build a cross-platform app that takes less time and cost to develop.

It is a cloud platform that allows amateurs to build websites easily without much technical proficiency. The mobile app is built on React Native and the framework is chosen because it is highly scalable.

Being one of the best cross-platform mobile app frameworks present today, several renowned apps are using React Native for efficient development and design. With a single codebase, developers can quickly develop apps for iOS as well as Android, which reduces the delivery time sufficiently.

Top Reasons to Choose React Native For Your Business

It is quite evident that React Native is amongst the most popular app development frameworks of today. However, businesses might be skeptical whether or not it is the right choice for their app.

If you have similar concerns, you have come to the right place. Here, we will help you with the reasons why your mobile app needs the help of React Native framework.

For a business, developing mobile applications for either the iOS or Android platform alone isn’t profitable as they need to target both. However, the time to develop separate apps and the cost involved for the same is quite high which isn’t the case when you choose to develop cross-platform apps.

And React Native provides you with the facility to develop cross-platform apps using a single codebase. Being an open-source platform, it is more readily accessible by developers, and the cost of development is also reduced. Hence, one of the many reasons why you should consider react native app development for your business.

Besides, the open-source framework has wide community support that ensures an abundance of React native app developers is available at your service. Thus, you just have plenty of options when hiring a top mobile app development agency.

As already mentioned, React Native uses a single codebase for developing apps for Android as well as iOS. Meaning, a developer can write code for the iOS platform and use it for Android as well. And the developers can also utilize existing libraries and reuse code blocks to save time and focus on optimizing the app for improved user experience.

When businesses hire React Native app developers, they can best utilize the resources and save on development costs as well for their projects.

Writing codes to create complex functionalities during app development is time-consuming. However, the availability of third-party plugins makes the task easier for developers as they don’t have to spend time writing lengthy codes.

Most businesses prefer native app development as it adds elevated user experience and performance to the mobile app. However, the cost involved is quite high and many businesses might not be able to shell out such an amount of money.

React Native provides such businesses with a great opportunity to reach a middle ground. The framework is perfectly built to develop applications with a native feel for iOS and Android. And the cost is comparatively less than native development.

React Native development framework is known for performance. Businesses can be sure to develop robust mobile apps that load quickly and don't lag when they choose this platform for development.

Thus, there are numerous benefits of choosing React Native to develop your business app. However, if you are wondering which kind of mobile applications are most suitable to be developed using this platform, your answer lies below!

What Types of Apps Are Best to Build Using React Native Technology? 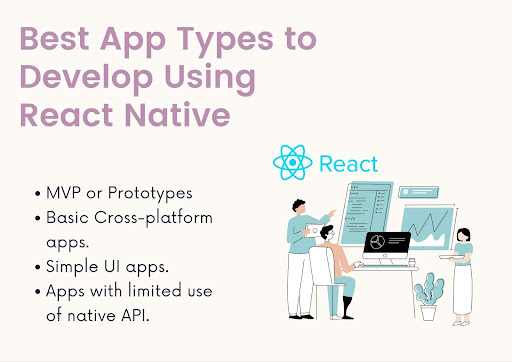 Every business has to go through this phase of dilemma where they are unsure if or not a particular development framework is suitable for their app. And making the right decision is the key to successful development.

Here, you will see in detail the most suitable mobile application types that you can build using React Native and check for yourself!

Startups and businesses that are just starting their venture with mobile apps are better off creating working products and optimizing on the go. They can release an MVP (Minimum viable product) of their app, engage customers and receive feedback from them, and optimize & extend the app at their pace.

Since React Native apps are easy to develop, creating prototypes and MVPs will be easier for developers. They can add minimal features, let the customers see their business idea, and get the deserved validation along the way.

Though React Native was originally released to support iOS platforms, the framework can now be used for developing Android applications as well. By writing a common codebase of about 85% to 90%, react native app developers can develop mobile apps for both platforms.

So, businesses that need a cross-platform app with basic functionalities and have a limited budget, can use this framework.

React Native uses Javascript for development and hence designing a simple user interface is easier. So, if you need to create mobile applications with seamless navigation and user interfaces, React native is apt for it.

4. Mobile apps with limited use of native APIs

To use system features like GPS, camera, etc., native APIs are used. And to integrate those into your React Native app, you would need help from skilled native developers and code bridges.

However, the process is time-consuming and the created application might end up being slow. Thus, it is wise to use React Native for applications that have limited dependency on native APIs.

Mentioned above are a few suitable application types that you can build with React native. Make sure you consider these pointers and ensure to develop a mobile app successfully.

And while you settle on the right technology for your business app, Auxesis Infotech is here to guide you with the design and development process. Being a renowned React native app development company, we have plenty of experience in various verticals of businesses and can develop quality software solutions for your business.

Thus, it is crucial to distinguish which applications should you build with React native and which you shouldn't. And here, you will learn about all of that and more perks that React native brings to the table for businesses and developers.