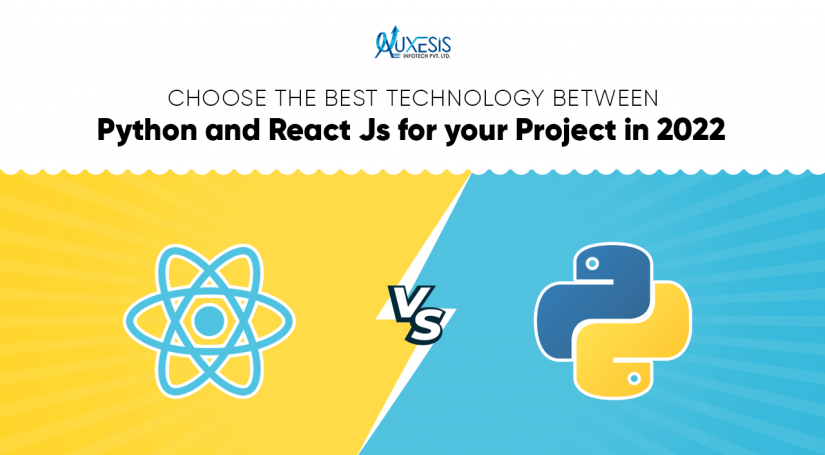 Python Vs React JS: Which Technology Would Be The Best for Your Next Project in 2022

A Statista report says that as of 2021, the most popular web framework is React JS with a 40.14% share. And as for Python, it is ranked among the top three most popular programming languages to be used in 2022. While both the technologies are clearly among the most popular ones chosen by software developers, businesses might be puzzled about which is the best shot for their project in 2022.

And if you think that the most popular one declares the better choice between the two, you might be in for a surprise! While React JS is an open-source library using javascript and allows creation of intuitive interfaces quickly, Python is a programming language that can be used for web apps and mobile app development.

Both the frameworks have their own advantages and drawbacks, but deciding which one is most suitable for a specific project could be a challenging task for businesses! If you are looking for ways to decide which one you should choose for your project in 2022, you have come to the right place.

But, before we discuss all that, let’s brief you about the two frameworks a bit to help you make an informed decision! 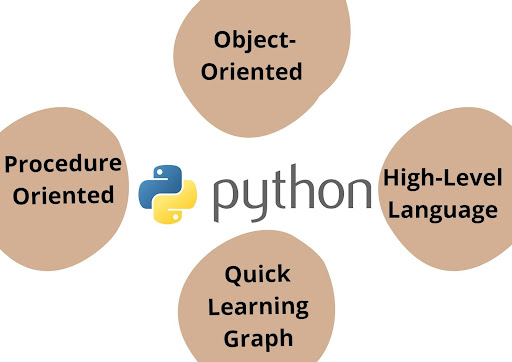 With a mild learning curve, this language comes as easy learning to developers. It has been used efficiently for web development in the past few decades and many recognized forms like Google, Facebook, Instagram, Microsoft, etc. have used it for some purpose or other.

However, developing mobile applications with Python comes as a challenge that not many can overcome. Widely used mobile platforms like Android and iOS don't identify with Python and do not support mobile computing with the platform.

Despite this, one can make it work using numerous libraries available to developers. Moreover, if you are planning to develop a web application, Python could be a significant choice.

Advantages of using Python for your project -

Even though the platform is readily accepted by developers, the decision to choose React Native for mobile apps or web apps is up to various factors. Here, look at some of the benefits of adopting React JS for development. 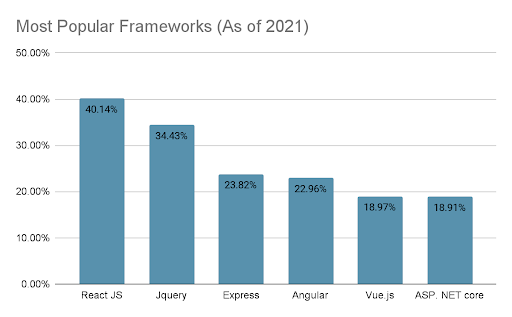 Advantages of using React JS for your project -

React JS has a multitude of features like virtual DOM, React Fiber, concurrent mode, and Suspense to make its user experience effortless and seamless. React JS developers can readily use the framework for creating user-friendly interfaces and experiences.

If you are in the software development industry, you would know that choosing the most popular platform or the trendiest web or mobile app development framework isn’t the way you decide. You need to consider what is most suitable for your project and decide accordingly.

Thus, it is common for you to be puzzled about the dos and don’ts of choosing React JS over Python or vice versa. Lucky for you, we have curated this list of various factors based on which you can compare the two and decide which would be the best choice for your next project in 2022. 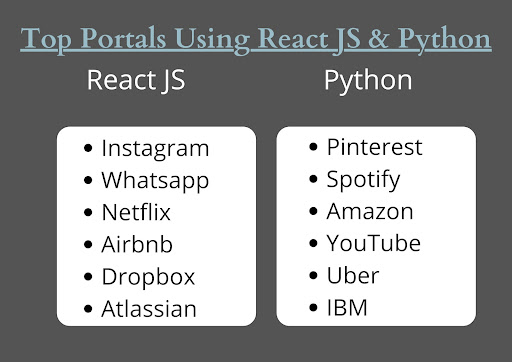 If we look into the year-on-year usage statistics of various software development frameworks, React JS is the most popular one in 2021 with a whopping 40.14% share. Whereas, Python is the most used programming language of 2019 with a share of 28.73%, which grew sufficiently in the subsequent years.
So, if you are looking for the most popular technology that businesses are using today, you have your answer.

In React JS development, component-based architecture is followed, which means the created UI of the system is divided into various components. And, each of these components is written in Javascript and follows unique logic instead of using a template. Thus, it becomes easier for developers to transfer data without affecting DOM.

One of the major reasons behind the popularity of React JS is the presence of virtual DOM that helps developers build web apps with more flexibility and efficiency. The virtual DOM acts as a copy of the original or site DOM. Developers can make any necessary changes to the virtual DOM where the affected component is updated only and not the entire system, making the development process much faster and cost-efficient.

Working as an extension to the Javascript syntax, JSX helps developers to write codes in javascript and HTML together. Creating functions in React JS is easier with JSX in place and it reduces the development time and efforts.

With declarative UI in React JS, the developers can design a particular component of the UI based on the data received. And React JS updates the changed component without affecting the entire design, making the execution smooth and effortless.

Unidirectional flow of data or one-way binding ensures developers can’t change any component directly as they have to use a call-back function to do so. Thus, React Native provides developers with more control and flexibility to develop apps.

There can be plenty of reasons why your business might need a mobile application, and choosing the right technology can be a crucial factor in determining its success. These React Native features can help you decide if this is the right one for your business.

Python is a high-level language, meaning developers are presented with a user-friendly interface and don't have to have intricate knowledge of coding structure, architecture, and memory management.

Being an object-oriented programming language, Python adheres to the concepts of objects, class, encapsulation, and more. It allows developers to build seamless functions that can be used and invoked as needed to build your project efficiently.

Unlike other OOP languages, Python doesn’t require you to compile codes separately. When a developer writes code, each line is interpreted into an intermediate language that is easily comprehended by the system. Thus, the overall run-time or execution time is reduced to a great extent.

Since Python is a dynamically typed language, developers don’t have to declare data types while writing codes as it is decided at the execution stage. So, simpler and fast coding practice is attained.

With huge library support of Python, building GUI or graphical user interfaces for the application is easier. Developers can code, utilize available libraries, and create impressive visual designs for the app.

Python utilizes C for coding and can be used with other popular programming languages like C++, Java, etc.

As evident from above, both technologies have their fair share of advantages and drawbacks. As a business owner, you need to understand which one can benefit your project in the long run and decide accordingly.

Python Vs React JS: When To Choose What?

Now that we have explained the various features, advantages, and drawbacks of choosing the technologies React JS and Python, it will be easier for you to decide. However, if you want to understand when one should choose a particular technology, the points below should help you with the Python vs React JS decision.

Keep the above-mentioned pointers in mind and decide on Python vs React JS, what works best for your project. Irrespective of the technology you choose, hiring the best mobile app development help is crucial for your project’s success. A reputed app development firm can provide you with the skillful resources and ideas to create futuristic and intelligent apps in 2022.

And Auxesis Infotech is one such agency that can help in your app development ventures with the vast industry experience and resources we have at our disposal. Our developers assure your imagined application can meet reality and user expectations at the same time.

Keep the above-mentioned pointers in mind and decide on Python vs React JS, what works best for your project. Irrespective of the technology you choose, hiring the best mobile app development help is crucial for your project’s success. A reputed app development firm can provide you with the skillful resources and ideas to create futuristic and intelligent apps in 2022.

Auxesis Infotech is one such agency that can help in your app development ventures with the vast industry experience and resources we have at our disposal. Our developers assure your imagined application can meet reality and user expectations at the same time.

The Role of Augmented Reality (AR) in Real Estate Sector