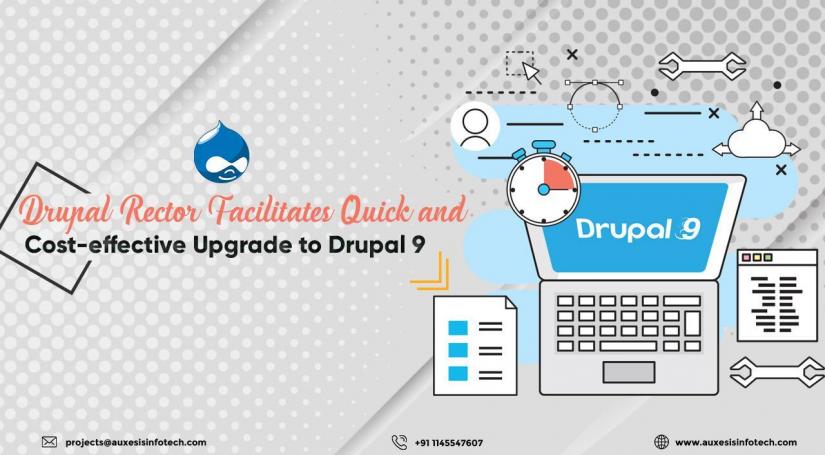 Upgrading to a new version of Drupal has always been an expensive and time-consuming process which includes building an entirely new website on Drupal and then creating a process to migrate content from your previous Drupal website. But this was the case before Drupal 8 was released. It came in the year 2015 with some new promises of drupal updates easy. As a result of that, it also makes it easy for users to upgrade to Drupal 9.

Now that, Drupal 9 is all set to release next month, it is time we should discuss the upgrade from Drupal 8 to 9 with Drupal Rector. If you are wondering why I’ve mentioned Drupal Rector out of nowhere. Well, if you search for various topics online regarding Drupal updates, you will find a lot of mention about Drupal Vector.

Getting Your Drupal 8 Site Ready For Drupal 9
In order to remove deprecated code, in a general situation, you would:

It requires a lot of manual and repetitive work to fix deprecated API in order to upgrade to the new major version of Drupal,  i.e., Drupal 9. However, if a single type of deprecation occurs multiple times, then you will need to figure out a way to fix all occurrences. Just to let you know, there are around 33000 deprecated code occurrences in all contributed modules. Don’t you think that would be a huge repetitive manual work to upgrade to Drupal 9?

Hence, the solution to this is Rector. It could speed up an upgrade process to the new major version of Drupal, which is, Drupal 9. And in that quick process, it also helps you reduce upgrade costs.

Rector is a PHP project that PHP developers overlook. It is known to automate the upgrade and refactoring of the code. For example, it can help you upgrade your Symphony 3 app to Symphony 4. You even perform Drupal 9 upgrade with Drupal Rector. And the process is quite smooth and seamless. Drupal Rector can automate deprecated code removal. It also performs other refactoring needed to upgrade from Drupal 8 to 9. It is more like a wrapper around the Rector project which ensures rules. In Drupal Rector, each rule upgrades code for a deprecated API in Drupal.

The use of Drupal Rector can result in the change to your database. Also, if you are thinking of getting your Drupal 9 ready with Rector, make sure you have a minimum of PHP version 7.2.

How Does Rector Works?

You may also like:  Hiring A Drupal Development Agency

Hope this post gave you an idea about all the potential capabilities of the Drupal-Rector. When it comes to getting your Drupal 9 ready, rector makes sure that your Drupal 8 code is compatible to be converted into Drupal 9. Now, if all this is clear to you, it is important we talk about how you are going to do all this. Well, only a professional Drupal development company can help you make that happen. And Auxesis Infotech is the right fit for that. We have proven experience in the field of Drupal development and Drupal migration services is one of our chief expertise.