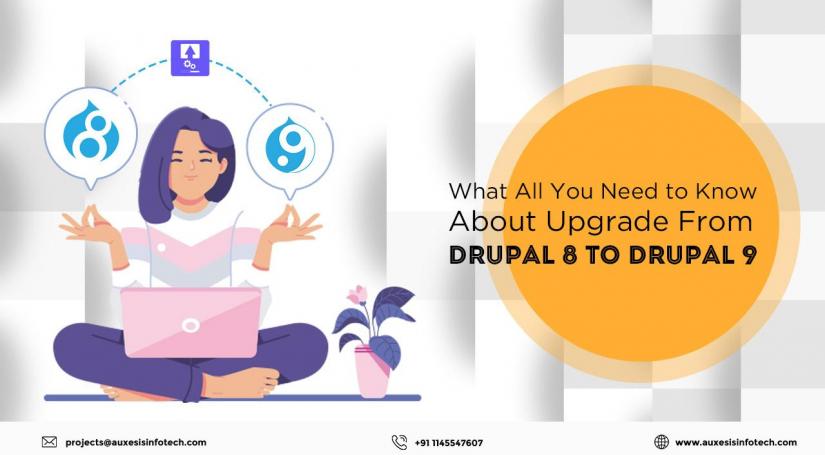 When to Upgrade from Drupal 8 to Drupal 9

Drupal 8 served effectively to its users for almost 5 years. Why we said it in the past tense is because the time has come to bid adieu the Drupal 8 version. Drupal is all set to release Drupal 9 on 3 June 2020. For a long time, there have been a lot of talks in the IT sector about Drupal 8 vs Drupal 9. So, the wait is over! Organizations are already looking forward to taking their website to Drupal 9. So, for all those who were keenly looking to know the If you are also one of those organizations that are all set to upgrade to Drupal 9 version, well, this guide will surely fill you with all the necessary information. So, here we go!

The decision to migrate Drupal 8 websites to Drupal 9 totally depends on what’s new with Drupal 9. Code clean up is a major reason for the release of Drupal 9. Since Drupal 8 is subjected to minor releases that occur after every six months, it somewhere results in deprecated code. This code is needed in the backward compatibility. Hence, in the comparison between Drupal 8 vs Drupal 9, Drupal 9 provides an opportunity to remove deprecated code and anything else which is no longer needed.

Another reason for the release of Drupal 9 is the third-party dependencies. With Drupal 9, users will get the supported version of the software like Twig 2 and Symfony ⅘ that will stay for a long period of time.

What Do You Need to Upgrade to Drupal 9?

The latest version of Drupal 9, which is Drupal 8.8, was released in December 2019. Now, the Drupal 9 is all set to release. There are a number of benefits of upgrading your website to Drupal 9; removal of deprecated code being one of them. It is expected that by November 2021, the life of Drupal 8 will be ended. Hence, this is the best time to upgrade to Drupal 9 technology. You will get a good amount of time to get to know about this technology and how it works.

How to Prepare For Drupal 8 Upgrade?

For those who are looking to migrate Drupal 8 websites to Drupal 9, the best way to prepare is to keep your site updated. It is important to understand that it’s your Drupal 8 website that will become your Drupal 9 website. It supports third-party dependencies and deprecated code removed.

Besides, if your Drupal website is using contributed modules, it is highly recommended to keep them updated. Also, ask your module maintainers to help you get rid of the deprecated code. A fact to know here is that the latest version of Drupal, i.e., Drupal 9 is built within the Drupal 8 version. As a result of that, developers can test their code and accordingly, make updates even before the release of Drupal 9.

Want A Thriving Business? Focus On Drupal 8 Benefits For Your Website

If you have only one question - what is new with Drupal 9, well, there are a lot of aspects that obviously cannot be covered in this post. However, the biggest benefit of upgrading your website to Drupal 9 is the migration process itself. Unlike the previous versions, upgrading to Drupal 8 to 9 is expected to be simple. If you are considering being one of the early users of Drupal 9, you need a Drupal development company that can help you make the entire migration process smooth and easy.  Auxesis Infotech is a highly-acclaimed Drupal Development company that is known to offer exceptional Drupal migration services. We can be your best bet if you are looking for highly-experienced Drupal developers.