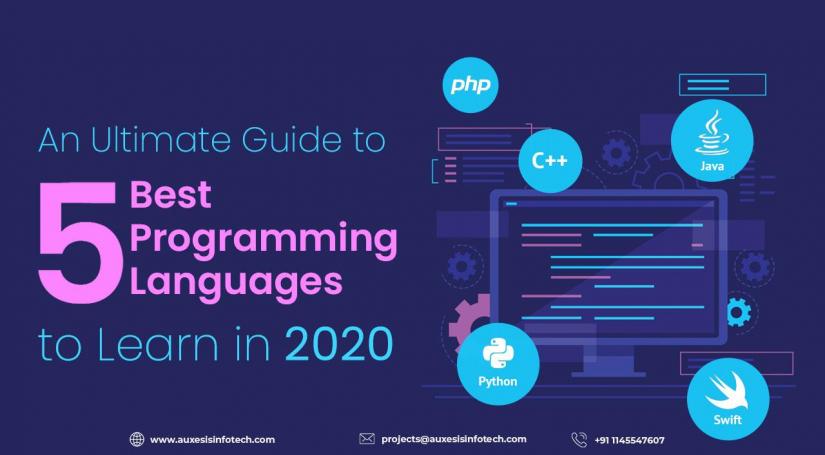 Since the year 2020 has arrived and as always, this year also, there will be a huge demand for developers. So, if you are one of those ambitious aspirants who want to make a career in the development sector, then here we have something for you - a guide to the top in-demand programming languages in 2020. So, without any much delay, let’s unveil the list!

JavaScript has always been one of the talked-about and popular programming languages in the development space. As per research, it is found that more than half of the developers prefer Javascript over other languages. At the present time, it is almost impossible to develop a program without this language. Being light-weighted and interpreted programming language, JavaScrip plays a crucial part in front-end development. But that doesn’t mean that it cannot be used in the back-end. With the help of Node.js framework, a developer can also use it in the evening time. Like past years, JavaScript will also be seen dominating the industry this year.

A widely-used programming language, Python help developers to develop applications, desktop apps, network servers, machine learning, and medial tools. Whenever it is about back-end APIs, Python is always the top preference of all the developers. The trait of being easy to understand makes it a highly-recommended language for beginners. If you are thinking of making a career in back-end development, then there is ain’t a better language than Python to start with. For a fact, the frameworks like Django, Turbo Gear, and Pyramid are based on Python language.

PHP (Hypertext Preprocessor) is a server scripting language which was created just to make personal home pages. Today, it is one of the most used programming languages, standing alongside JavaScript and Python. PHP runs on a server and is very useful in creating web pages that are mainly written in HTML. Being cheap, free, and easy to use, this programming language is one of the prefered choices of beginners to learn development. Not just beginners, but PHP is also a prefered choice of experienced developers whenever it is about developing a web application.

Talking about mobile application development, Swift is another prefered choice by developers that will be there as one of the top and in-demand programming languages in 2020. It is widely used to develop iOS applications. Since the users of iOS devices are constantly increasing, there will be a continuous need to develop apps for the iOS platform. Hence, not just 2020, but coming few years will also see Swift as one of the top programming languages.

Like all the above-mentioned languages, C/C++ is yet another important programming language. It is the mainstay of programming as all the low-level systems, like that of, file systems and operating systems are written in C/C++. Hence, it will be one of the most important languages to learn in 2020. For a fact, C/C++ is extremely stable and fast and it comes with Standard Template Library (STL). STL consists of a bunch of ready-to-use libraries used for various data structures, algorithms, and arithmetic operations.

4 Popular Web Design Myths Busted To Have A Beautiful Website

In order to be a pro developer, having knowledge of just these languages is definitely not going to be enough. You have to be open to the thought of learning all other programming languages to enhance your development skills. If you need more guidance about which programming language you should learn next or start with, then you can connect with Auxesis Infotech. They are one of the best and highly-recommended developers with years of experience and professional knowledge.

Unnecessary pop-ups can irritate your user.