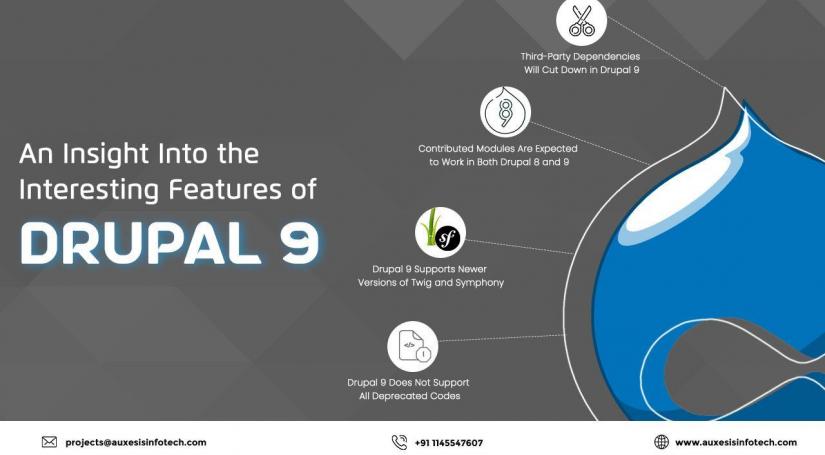 An Early Look at Drupal 9: What New and Interesting Features It Has?

The wait is almost over! Drupal is set to be released on 3rd June 2020. Just to let you know, this will be the first major release for the CMS and this Drupal’s latest version will be coming up with the built-in backward compatibility. As a result of that, the upgrade process from Drupal 8 to 9 will be quick and seamless. But that’s not all! Drupal 9 release is coming up with some more amazing features that we will discuss in this blog post.

But before talking about features of Drupal 9, let’s know more about Drupal 9.

An Insight Into Drupal 9

Drupal is releasing in June 2019. The talks have been around that Drupal’s latest version will overhaul the Drupal upgrades. Just to let you know, Drupal 9 is built on the current version. The latest version of Drupal is looking to make CMS a lot easier so that more and more organizations can look to make the most of Drupal migration services.

Talking about what’s new in Drupal 9, here are some top features to look out for in Drupal 9.

The earlier versions of Drupal never had an easy upgrade process. The best thing is it’s all sorted now. It is because of the fact that Drupal 9 stripped off all deprecated codes of Drupal 8.

One of the reasons why you should look to upgrade your website to Drupal 9 is that the latest version won’t support any deprecated code of Drupal 8. With Drupal 9, you will have to maintain a routine of removing out of date or deprecated codes.

One of the most popular features of Drupal 9 is that it is coming up with you with the latest version of third-party dependencies such as Symphony 4.4 and Twig 2.0. However, replacement of the older version of Symphony and Twig with newer versions will only occur in November 2021 when Drupal 8 will come to the end of its life. These upgrades will improve the performance along with enhanced security and improved developer experience.

Since the deprecated functionality will be removed in Drupal 9, the third-party dependencies will get will cut down.

When it is about what’s new in Drupal 9, one of the major features will be that Drupal 9 will include a majority of Drupal 8 modules.

You may also like:  Jumpstart Your Drupal 9 Upgrade With Drupal Rector

Many people are saying that “there is nothing new in Drupal 9” which is not at all correct. Drupal 9 is coming up with some amazing set of features (as mentioned above) that help you upgrade your website to Drupal 9 without any much difficulty. Now, if all these features are enough to convince you to adopt Drupal 9 migrate, then Auxesis Infotech is here to help you. We are a highly-acclaimed Drupal development company offering a wide range of exceptional Drupal solutions to our clients.