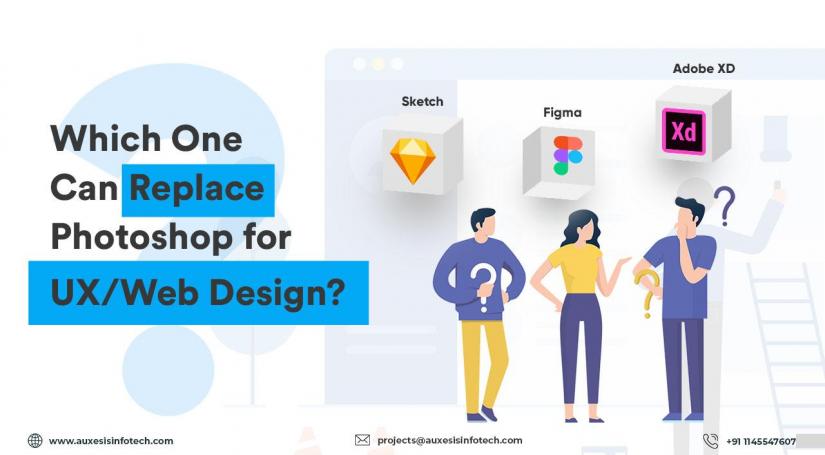 Is Photoshop Still the Best Software for UX and Web design?

Alright! So, are you using Adobe Photoshop for UX/Web Design? Well then, no one else but you know better how much this tool is essential for you. Adobe Photoshop is probably the most sought-after tool used by the professional UX/Web designers.

For the past few years, Photoshop has been around for a long time, and hence, is reckoned to be the most-prefered designing tool for creating designs and graphics. Over the years, it has gained numerous UI and web design features including paragraph/character styles, artboards, and improved web export options.

Talking about whether or not Photoshop is still the best software, well, indeed it is. But that doesn’t mean you cannot go for other options. For a fact, there are a number of alternative options of Photoshop available for the designer, Adobe XD and Sketch being the top of all. In this post, we are going to talk about these tools that can be used as the alternatives of Photoshop.

So let’s get started!

Whenever it is about the best designing software after Adobe Photoshop, then it has to be the Sketch. This tool has been in the picture since 2010. But as they every best thing comes with a limitation. The same goes for Sketch as this tool is only macOS. But, this is not seen as a problem by designers.

With Sketch, one can design wireframes or finished visual designs. These visual designs can turn those into clickable prototypes with prototyping tools. Not just this, the symbols and styles are quite powerful in Sketch. These styles and symbols allow designers to easily create complex design systems that are manageable and flexible across big projects. The yearly subscription of Sketch costs around $99. At this price, you also get the year of updates as well as Sketch Cloud. The best thing about Sketch’s subscription is that even after the year, you can continue using your update with no other payments. On the whole, Sketch is a great Photoshop alternative for Mac users looking to build a powerful and affordable UX/web design.

Well, yes, you can replace one Adobe product with another Adobe product. Adobe XD is one of the newest tools for UX/Web designers. This tool comes as an all-in-one solution for UX/web design, ranging from visual prototyping, voice prototyping to visual design. The tool is more like Sketch in terms of how it works. It wouldn’t be fair with XD if you consider its effectiveness by its experience. Though it came in the picture recently, the features (like that of voice prototyping, auto-animate, and repeat grid) in XD are the ones that can be found in some popular designing tools. However, Adobe XD is more advanced in some ways than its competitors.

It has received enough features that designers can use to work on small projects. However, the tool still lacks some features. But Adobe has been rapidly fixing these things and adding features. Hence, in the future, you can expect some more featured to be added in XD. You can use XD for free to see if the tool goes well for you. Though the free version of XD gives you the access to full app, but it still limits you to one shared prototype and design spec. To share multiple design specs and prototype, you can get the subscribed version at $9.99/month with all the CC apps for $52.99.

Figma is the first interface design tool with real-time collaboration. I have seen and heard designers comparing Figma to Sketch. But, what I think is that the competition is not between the two but between Figma and Adobe Photoshop. Well, I guess we already know the result of that competition. But, what matters is the fact that Figma is one of the most popular choices of UX/Web designers.

Talking about the software, it is a cloud-based tool which is more like Sketch in features and functionality. The best thing about this tool is that it works on all or any operating systems that run a web browser. Not just Windows and Mac, but Linux and Chromebooks users are also using this tool on their respective OS. The universal nature of Figma prevents the annoyance of PNG-pong. Also, there is no need for a mediating mechanism to make your design available for everyone. Figma is more effective when it comes to helping designers and teams work together efficiently as they all can collaborate in Google docs.

Well, no way you can replace Photoshop with any other software (at least that’s what I believe). However, you never know, in future, you might witness any of these alternatives replacing Photoshop. But for now, Photoshop is the best software for UX and Web Design.

Can you Decide your Business Website Design all by yourself?

For more such amazing posts related to web design and development, consider reading Auxesis Infotech’s blog. Being a highly-rated web agency, they have experienced professionals who work not just to bring authentic posts to users but also to develop and design the best apps and websites for clients.

Why Do You Need To Revamp Your Healthcare Website?

Create an Engaging Healthcare Website For Your Patient Using This Guide